It is HOT.  I’m sure you knew that already, but I just wanted to make sure.  We usually spend a lot of time outdoors during the summer, but it’s so hot that even Bryson says “I wanna go in, mom.  It’s too hot!”  So, you can guess that we’ve been cooped up in the house.  We do spend about 2 hours outside in the evenings, but that’s about it.  Hello Fall.  Where art thou? 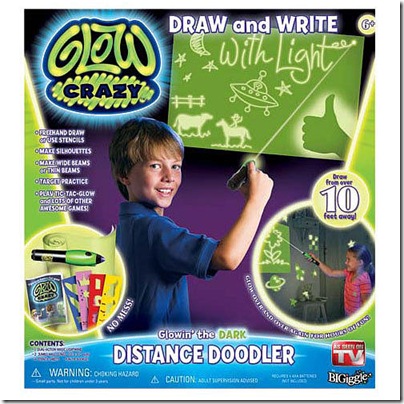 Since we’ve spent so much time inside lately, I’ve Bryson has had the chance to play with some new toys like the Glow in the Dark Distance Doodler.  At first glance, I was bummed because it’s supposed to be for ages 6 & up.  As y’all know, Bryson is only 2, but he has had a blast with this thing.  We all have, honestly!  It comes with a little light-wand that you use to write on the included jumbo wall clings and your creations glow in the dark.  Bella’s room has black-out curtains so we take it in there and just doodle and play.  Justin and I brought out our regular flashlights, so we could each have one, then we showed Bryson how to use the stencils to make glow in the dark cars.  There are 4 sheets of stencils included and tip booklet.  I bet it would be fun to take this outside at night & let the kids play!  (hadn’t thought of that until just now..)

You can purchase the Glow in the Dark Distance Doodler at Walmart or it’s currently on sale for $21.05 at Amazon. 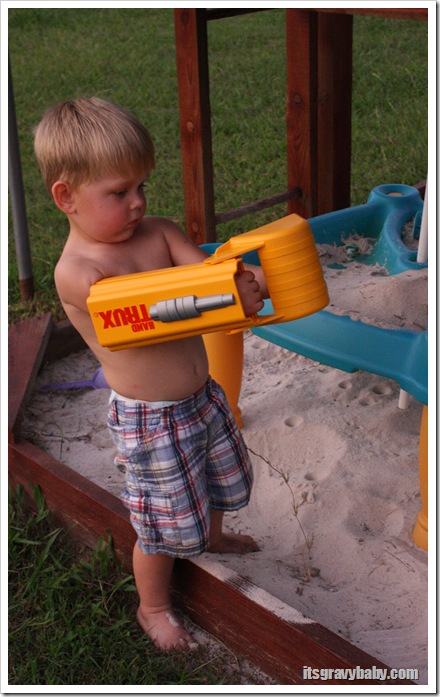 My husband looked at me like I was crazy when I said I didn’t think Bryson would like the HandTrux Backhoe.  Well, my husband’s instinct was right on that one.  I also thought it might be too difficult for him to work- wrong again.  Bryson immediately put the HandTrux Backhoe on and went to work in his sand box.  He LOVES it.  I should have known since he is obsessed with heavy equipment that he would get a kick out of a backhoe he can wear & use!  I love that this toy encourages him to use his imagination while he plays outside.  Don’t tell my husband that I told you, but I caught him playing with it too, haha.

You can pick the HandTrux Backhoe up at Amazon for $13.64. 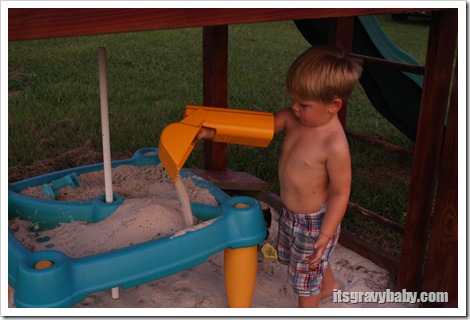 Have you found any cool new toys this summer?

We received these toys free of charge in exchange for our honest review.  No other compensation was provided.  All opinions remain my own, as always.

One of our favorite October traditions is this car