We spent Sunday up in Chattanooga, TN having a “family day” and we had a blast.  The kids were both spectacular- only one minor meltdown the entire day.  Bella nursed once during the entire trip and she never once cried hysterically.  That in itself is some kind of record.  We even sat in traffic for about 35 minutes and she was cool with it.  Bryson was so excited to see Thomas the Train.  He’s a pretty good kid most of the time, but like any 2 year old, he has A LOT of energy.  He acted great though- it was bliss. 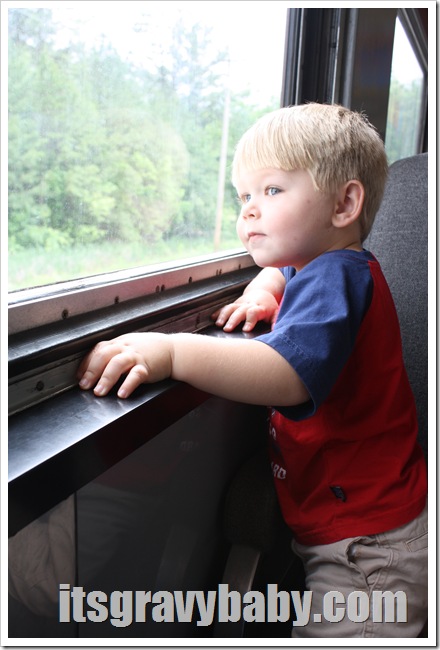 There was a lot to see and do at Day Out with Thomas: Leader of the Track Tour- much more than I expected.  We sat in traffic for about 35 minutes in Chattanooga, so we boarded our train first thing.  It was different than I expected- the seats were comfortable and very roomy.  They were in sections of four, two seats on each side, so we had plenty of room to stretch out and sit all of our junk baby things.  I took the advantage of the space and comfort & nursed Bella.  The ride lasted about 25 minutes.  Bryson and Justin were both so excited about the ride and LOVED looking out the window.  I’m not sure what I expected, but this was better than I could have imagined.  A quiet baby, a thrilled little boy, and a husband whose face lit up like a kids.  It was perfect. 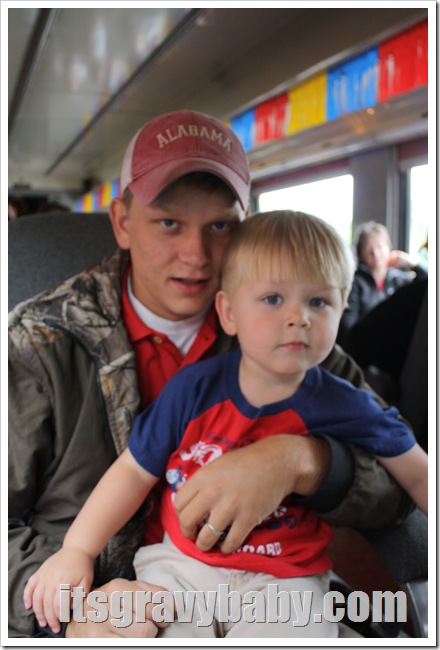 My favorite guys on the train. 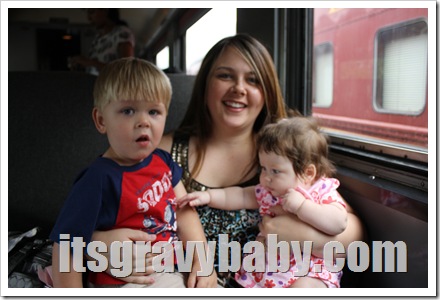 My attempt at a photo with the kids, haha.

After the train ride, we went to the petting zoo.  The animals were all inside a fence and you could just walk right in with them.  There were chickens, rabbits, goats, a donkey, and sheep.  Bryson was in animal heaven and had a blast petting each and every one in there.  He would look at me and say “That’s my big buddy, mama!”  We stayed in the petting zoo for probably 30 minutes…. until the donkey pooped and it splattered on Justin’s pants, haha.  We decided to leave before it started stinkin’ in there. 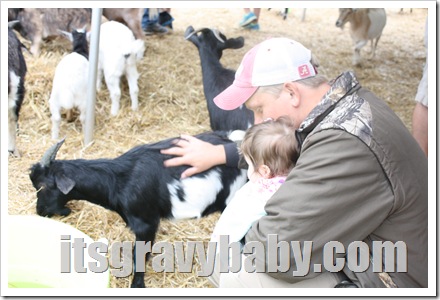 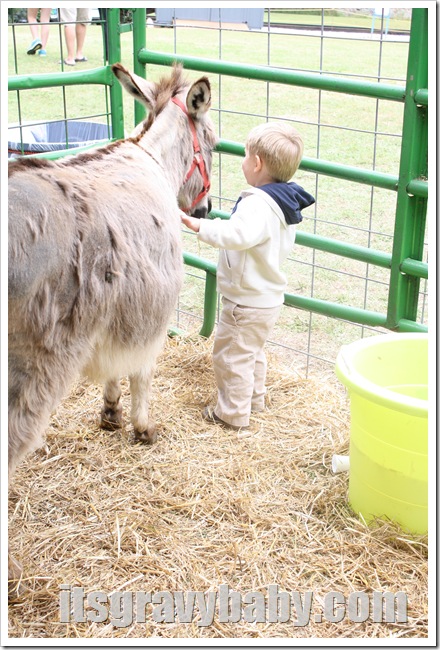 My camera batteries went dead while were in the petting zoo.  I’ll check them the night before a big event from now on- lesson learned.  Instead of getting upset though, I decided to just be in the moment.  We bribed Bryson out of the petting zoo with the promise of ice cream.  There were several places to get snacks and drinks.  Some of the other activities included storytelling, videos to watch, train & block tables, magic shows, and live music.  I couldn’t believe all the fun things they had packed into one event.  You could also take pictures with Sir Topham Hatt and Thomas, but Bryson doesn’t do well with lines and this event was for him so we opted not to worry about the photos.  The lines weren’t super long, but they weren’t worth upsetting Bryson over, ya know?

The single meltdown of the day happened in the gift shop, of course.  Bryson wanted everything in there and it was definitely a Thomas fan’s dream.  We settled on a wooden train horn and called it good.
Thomas the Train will be in Chattanooga at the Tennessee Valley Railroad this coming Friday, Saturday, and Sunday.  If you missed it this weekend, you can still make it!  Click here for more information and to order your tickets.

If you aren’t local, you can still find an event near you!

We received free tickets to attend Day Out with Thomas: Leader of the Track Tour, but no other compensation was provided.  We had a blast and will definitely attend again next year!