Wow, wow, wow.  My daughter has been here two full months.  It feels like just yesterday that I saw the word “Pregnant” light up.  So many worries that I had while pregnant now seem so silly.  I’m gonna get really honest here, so if you can’t handle it or have something negative to say, take in elsewhere. 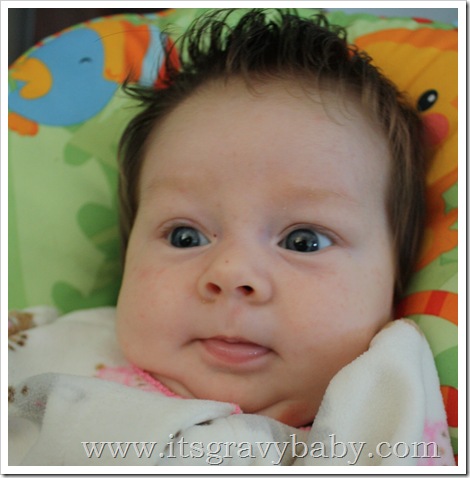 I was afraid I wouldn’t love her as much as my first born.  I thought of this often.  Even though I prayed for her and wanted her badly, I was so scared that I wouldn’t feel the same way about her as I do Bryson.  I know that those thoughts are completely natural and I also know that they are completely unfounded.  Of course I love her as much as I do Bryson.  From the moment I reached down and brought her onto my chest, there has been no doubt. 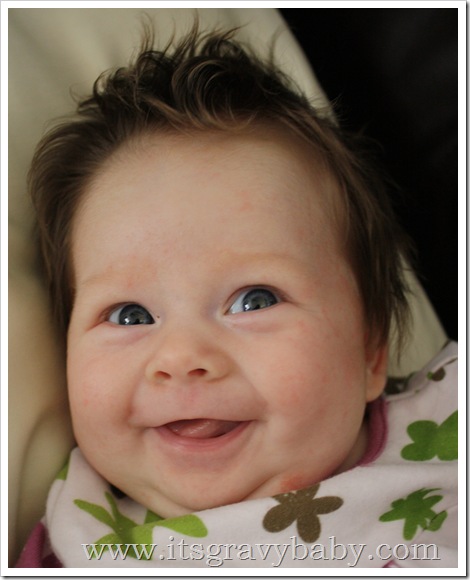 I worried that I wouldn’t “cut it” as a mom to a daughter.  Up until the moment I realized I was having a daughter (a profound moment well before our ultrasound, I knew) I thought I was meant to be a mom to boys.  I truly thought God would never want me to have daughter.  I’m so glad I was wrong.  I may not know how to fix her thick, dark, but I will learn.  I am her mother, but eventually I hope to be her best friend. 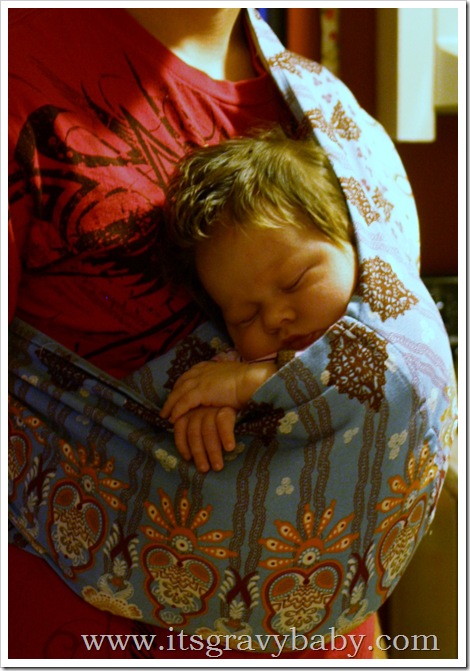 So, what has Miss Bella Grace been up to for the past few weeks?  She started smiling right around the 5 week mark.  If you show her just a little attention, her entire face will light up.  She loves being talked to and held.  She has started to enjoy her swing a bit more too.  She’ll last around 20 minutes it, just looking at the moving mobile, and cooing at it.  She “talks” quite a bit and it is seriously the sweetest sound. 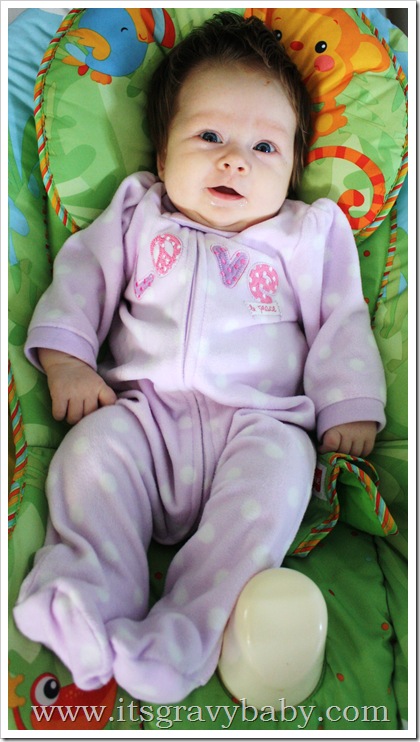 She currently has her first cold.  I hate it.  She is congested and has a small cough.  I took her to the doctor on Wednesday and they said it is just a cold.  Unless she starts having trouble breathing,  she should be fine.  She weighed in a 10lbs 4oz.  She goes back for her two month check-up next week. 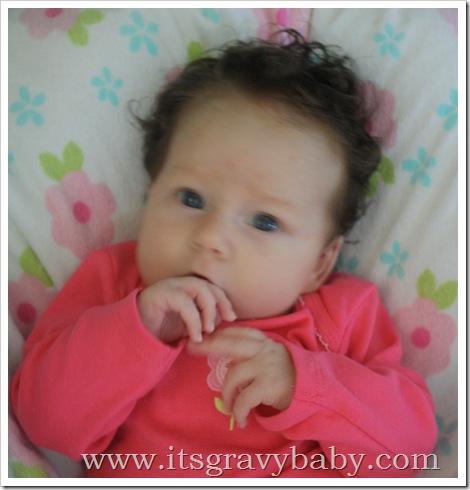 She has finally outgrown her newborn clothes and is wearing 0-3 months.  She has so many cute outfits and it makes getting her dressed a lot of fun.  It takes me longer to decide on her outfit than my own.  She’s wearing a size 1 diaper and going through them quite often. 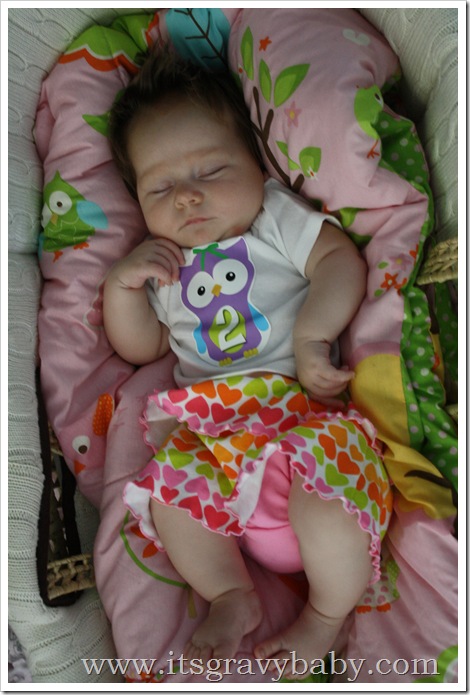 We are still exclusively nursing and she is finally slowing down.  Last week and this week have been major improvements.  She is becoming more content to sit by herself and she realizes she can survive without being latched onto her mama 24/7.  She nurses about 3 times during the night and I love feeling refreshed after a good night’s sleep. She nurses at least every 2 hours during the day, but it’s much better then every minute of every hour. 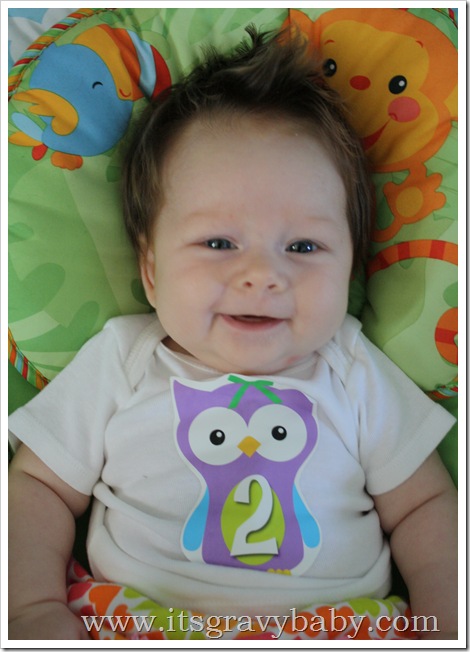 The weather is finally warming up enough that we’ve been able to spend time outdoors.  She spent two hours outside yesterday afternoon and seemed to enjoy it.  I’m sure she just liked being out of the house for a change.  This weekend is supposed to be beautiful, so we’ll be outside soaking it up. 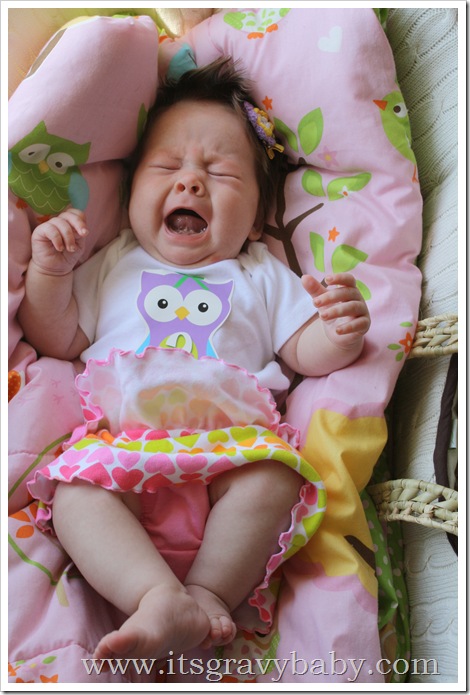 Bryson has finally started calling her “Bewwa” every once in a while.  Up until now, she has simply been “Baby” or “Baby Sister.”  He is so sweet with her and he likes to “tickle” her.  I have to remind him to be easy sometimes, but he loves her to pieces.  “Where’s Baby?” is his first question every morning.

I’ll update this post with her weight & length after her check-up next week.  (: