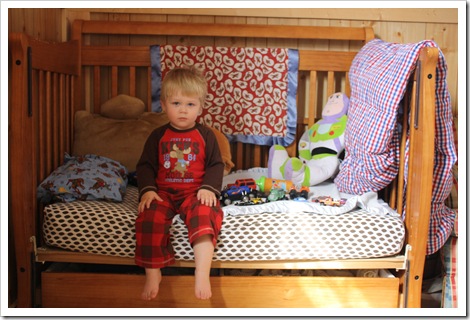 Transitioning Bryson’s crib into a toddler bed hadn’t crossed my mind.  He’s only two and has never climbed out of his crib.  Climbed in it?  Oh yes, only every single day, but it didn’t bother me.  (Maybe I wasn’t thinking?)  He would climb in it to play or watch a movie, but he’d yell for me (or hubby) when he wanted out.

Sunday night, Justin decided to take the side off his crib and turn it into a toddler bed.  Again, I have no idea why I hadn’t thought of this!  Bryson thought his bed was broke and he kept saying “Look!  It’s broke!  Daddy broke bed!”  We explained to him that it wasn’t broken, but I’m still not sure he believes us.

We expected him to give us a bit of a hard time when it came time to sleep.  Justin had to scold him only once before he got into bed for good and drifted off to sleep.  I was afraid he’d wake up super early, simply because he could get out on his own.  Not so!  He slept until after 9a.m. Monday morning!

Nap time was our last “hurdle” and it wasn’t one at all.  I told him it was nap time on Monday afternoon and he went to bed.  No problems at all.  I am so proud of him and honestly, surprised that it was that easy!

Nap time on Tuesday was more of a production, but it wasn’t bad either.  He popped out of bed a couple times, but when I repeated it was nap time, he went back to bed completely on his own and went to sleep.

Bryson has now slept in his bed three nights in a row and taken a nap each day this week.  Things like this are bittersweet for me and always take me by surprise.  On one hand, I love watching him hit these milestones.  On the other hand, I want him to slow down! 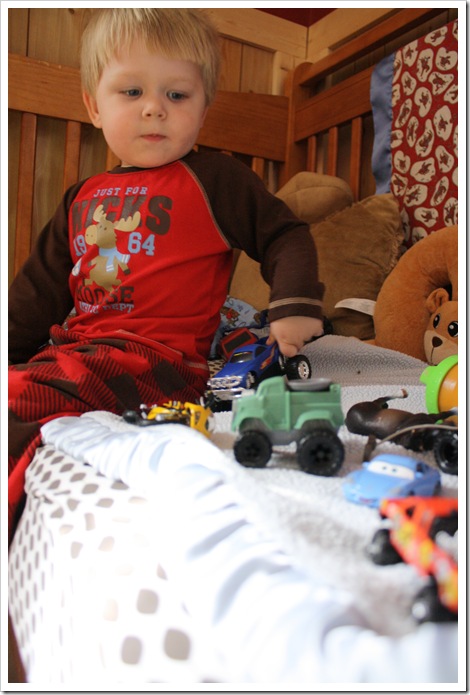 Yes, he does sleep with almost all of those cars.
I think it is so adorable & it melts my heart!

There has been a problem with your Instagram Feed.