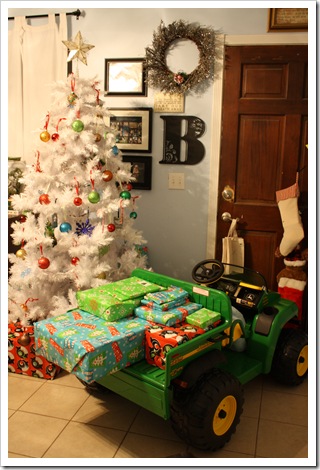 This was Bryson’s last Christmas as an “only child” and we so look forward to having his sister here soon.  We have less than four weeks until my due date!  After Bryson was in bed Christmas Eve, Santa (*ahem* Daddy) brought his new gator out of it’s hiding spot.  We’ve had stored in Bella’s room for the past week with the door locked.  Justin had the great idea of loading the bed of it with some of his other gifts. 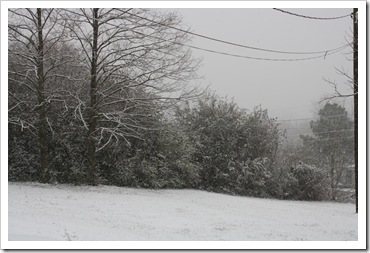 Christmas morning, Justin & I woke up and I struggled to get out of bed and start a pot of coffee.  As soon as I entered the kitchen and spotted the scene outside, I started hollering for Justin to get out of bed and come look.  We woke up to a white Christmas!  Now, I’m sure that isn’t a big deal to some of you, but for us southern folk- it’ s huge.  The only downside was that we knew Bryson wouldn’t be able to enjoy his new John Deere gator, but we’ll have plenty of time for that in the future. 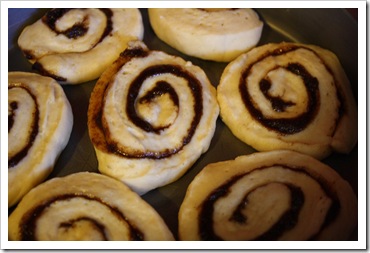 I popped some cinnamon rolls in the oven and called my parents to let them know we were up.  This was our first Christmas as a family (meaning, with Bryson) to be back in our own home.  Bryson’s past two Christmas’ we were living with my parents.  Bryson woke up just a few minutes before the made it over.  We let him play in bed while we waited.  Justin & I had already opened our gifts, so we all watched Bryson uncover his gator and open his gifts. 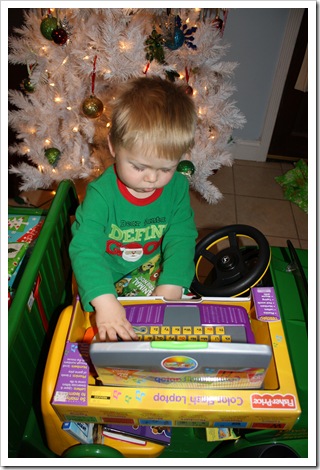 Bryson’s favorite gifts were this little computer and his race track.  He feels so big with his very own “puter” and we’ve played with the Little People Ramp way for hours already.  I’ll be glad when it’s pretty enough to play on his gator!  He did get to go out and play in the snow.  He absolutely LOVED it. 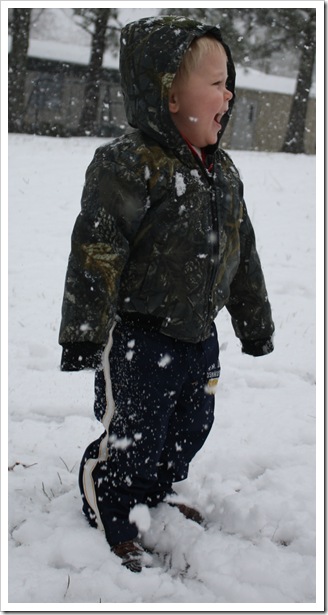 Every Christmas since 2008, I’ve said was the best.  I get to say that again this year and I anticipate I will for years to come.  The snow will make this one of the most memorable for sure.  After opening gifts and playing in the snow, I made some snow-cream with the help of my new Kitchen Aid.  It was Bryson’s first taste of snow-cream and was a definite hit.  The entire family, even our dog, enjoyed snow cream for a snack on Christmas. 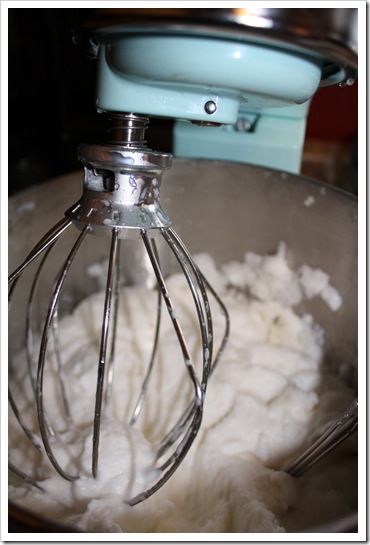 Santa spoiled me this year, so I’ll have several reviews to write up in the future.  I hope you all had a wonderful Christmas too.  Now, I’m just looking forward to Bella arriving soon.  I go back to the doctor tomorrow, but I had already started dilating and thinning out last week.  I’ve had very irregular contractions over the past week and I am very ready to meet my daughter!