I know I am a bit late with my Halloween post, but I wanted to put it up anyways.  Unfortunately, Bryson came down with a cold last Thursday, so we weren’t able to do as many things as we wanted.  I try to remember that he won’t remember, so it is okay.  I wanted to decorate the yard, take him to the pumpkin patch, and take some photos, but none of that happened. 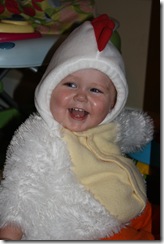 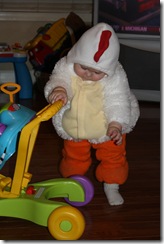 We did take Bryson trick-or-treating, but we kept it short and sweet, so we wouldn’t spread the runny nose germs too far.  He went to the Sheriff’s Department to see his Gangan, to Lowes to pick out paint, to his Aunt Wendy & Uncle Paul’s (where his Pawpaw Stoney was also), and then to his Mawmaw Mars’ house.  After that, we called it a night.  He ended up with some vanilla wafers, suckers, apple wagon wheels, juice treats, and socks. 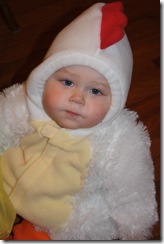 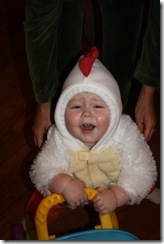 I don’t think he enjoyed it at all this year.  He hates getting in his car seat and he had not taken a nap all day.  So, he was tired, sick, and fussy, but he was happy as could be around others.  Even so, he was the cutest chicken I have ever saw!